After launching in various colors – Gray, Silver, Champagne Gold, Mocha Brown, Ceramic White, Black in the past, Huawei Mate 9 will be launched in two new colors – Blue and Red. A new image popped up on WeiboÂ hinting at the launch of these two colors in coming months. The phone was launched last year in early November and sold out more than 5 million units so far. 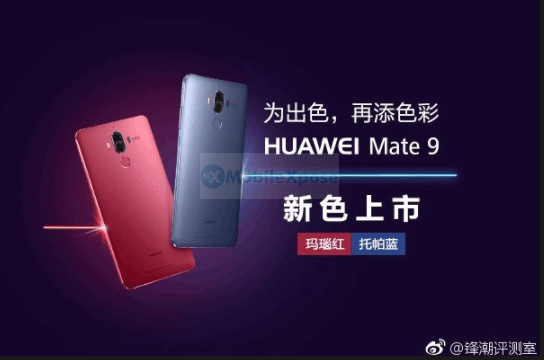 Huawei Mate 9 has a 5.9-inch Full HD display with Gorilla glass 3 protection. Under the hood, the Huawei Mate 9 has got an Octa core Kirin 960 processor combined with 4GB of RAM. There is 64GB of internal storage, which can be further expanded upto 256GB. The phone runs on Android Nougat. The phone packs a 4000 mAh battery, which is accompanied with quick charging feature.

Coming to the camera department, the Mate 9 flaunts a dual-camera setup, which is equipped with a 20-megapixel monochrome lens and 12-megapixel RGB lens. On the front, the phone has an 8-megapixel front snapper.