Scheduled to be launched on May 26 in an event, Huawei upcoming phone, Nova 2 has emerged online once again. After appearing on TENAA, the Huawei Nova 2 Flexi banner popped up online revealing all color variants of the upcoming smartphone. As per the leaked image, the Huawei Nova 2 will be launched in three different colors – Blue, Rose Gold and Green. 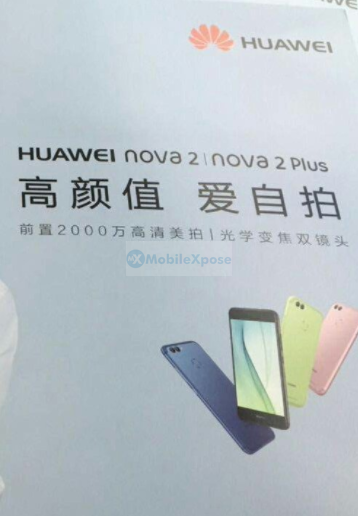 Besides Nova 2, Huawei Nova 2 Plus will also be launched at the same event in same color variants barring minor specs upgrade. As of now, Huawei Nova 2 and Nova 2 Plus are expected to be powered by Snapdragon 660 chipset. Both the phones will carry a dual rear camera setup. A fingerprint scanner is fitted onÂ the back of the device.