An upgraded 4-inch Apple iPhone SE 2 has been constantly in news since long. Now, a recent leak on Weibo has unveiled full specifications of the upcoming Apple iPhone SE 2. According to the leaked image, the iPhone SE 2 will retain the same 4-inch retina display last seen in its predecessor. Inside, the new iPhone will be equipped with A10 Fusion chipset, added to iPhone 7/7 Plus. 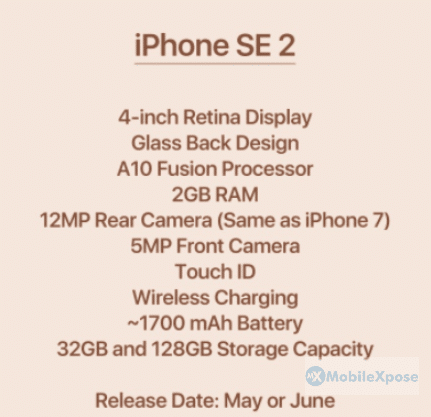 In terms of optics, the Apple iPhone SE 2 will sport a single 12-megapixel shooter (same as iPhone 7) and a 5-megapixel selfie snapper. The phone will have a fingerprint scanner in front.

The release date of the phone is yet to be known. However, the leak hints it to be launched in May or June 2018. Along with this leak, three colours of the upcoming iPhone have been spotted (created by AppleiDesigner) as well – Gold, Black, and Silver.