After appearing on benchmarking site and receiving different required certifications such as FCC, Bluetooth SIG, Samsung Galaxy J2 Pro (2017), codenamed as SM-J250F, has received WiFi certificate. As per the listing, no detailed specification of the phone is confirmed, barring that the upcoming Samsung smartphone will run on Android 7.0 Nougat. However, the GeekBench listing reveals Android 7.1.1 Nougat version. 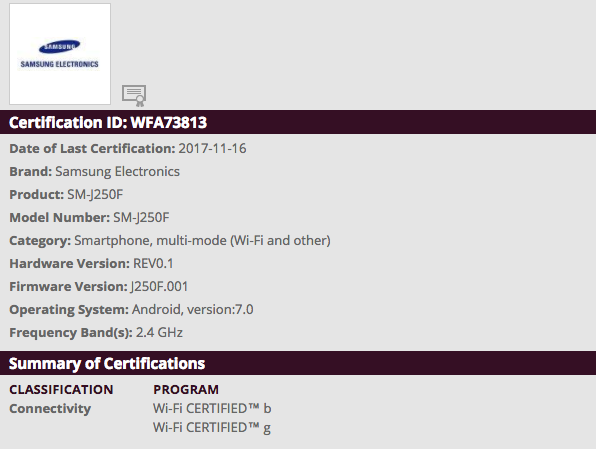 As per previous leaks and benchmark results, Samsung Galaxy J2 Pro (2017) would be equipped with a 5-inch IPS display with a resolution of 540 x 960 pixels. Inside, the phone will be launched with a Qualcomm Snapdragon 425 chipset coupled with 1.5GB/2GB RAM. Internal storage space would be 16GB. The memory would be expandable.

Camera-wise, the phone would get an 8-megapixel rear camera coupled with smart glow LED. On the front, the device will carry a 5-megapixel front-facing sensor.

No Battery detail is known at the moment. With all these certifications, and leaks, the launch of the smartphone could be expected in a couple of weeks.