Xiaomi has plans to launch its flagship smartphone, Xiaomi Mi 6 along with its bigger brother, Xiaomi Mi 6 Plus by mid April at an event. Now, a couple of live images of the Xiaomi Mi 6 Plus have emerged on Weibo – Chinese social networking site – revealing front and rear side of the phone. The front panel of the phone has a narrow bezel design along with a fingerprint scanner sitting at the chin of the device. Only black color variant is leaked in the image. 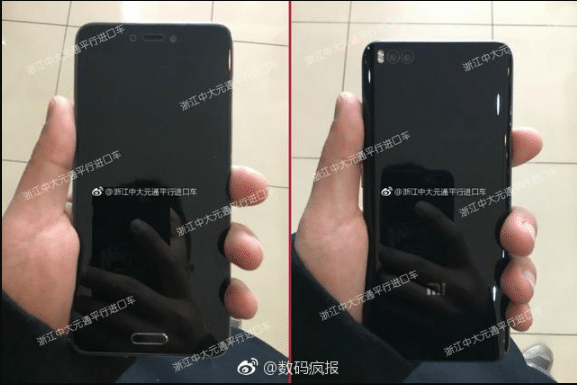 As per previous leaks and rumours, Xiaomi Mi 6 Plus will have a 5.7-inch Full HD display powered by Snapdragon 835 chipset paired with 6GB of RAM. On the storage front, the phone will have 128GB of native storage space. Coming to the camera, the Mi 6 Plus will have a Dual rear camera setup (shown in the image) measuring 12-megapixel. There will be an 8-ultrapixel front snapper. A massive 4500 mAh battery is added as well.

Talking about the Xiaomi Mi 6, the phone carries a 5.15-inch Full HD display fuelled by same chipset that the Mi 6 Plus carries. Two RAM variants – 4GB and 6GB are expected. Camera-wise, the phone has got a 19-megapixel rear camera and an 8-ultrapixel front snapper. A comparatively smaller battery, 3200 mAh is fitted.

As far as pricing of the phones are concerned, following prices are leaked sometime back. Xiaomi Mi 6 price could start from CNY 1999 (4GB variant) and goes upto CNY 2699 (6GB RAM variant). The bigger brother, Xiaomi Mi 6 Plus will be priced around CNY 2,999.