Motorola, after launching one of the most beautifully crafted smartphones, Moto Z across the globe recently, is all set to unveil the Moto Z Play in the coming days to come. The much touted release date of the phone is said to be 6th of September. Now, just before 10 days of its tentative release, the phone made its debut on a benchmarking site, GFXBench. As per the benchmarking site, Motorola Moto Z Play will have a 5.5-inch Full HD display (most probably AMOLED display) along with an Octa Core CPU clocking at 2.0GHz. Snapdragon 625 chipset is expected. There will be a 32GB of inbuilt storage space and 3GB RAM for efficient smartphone usage. 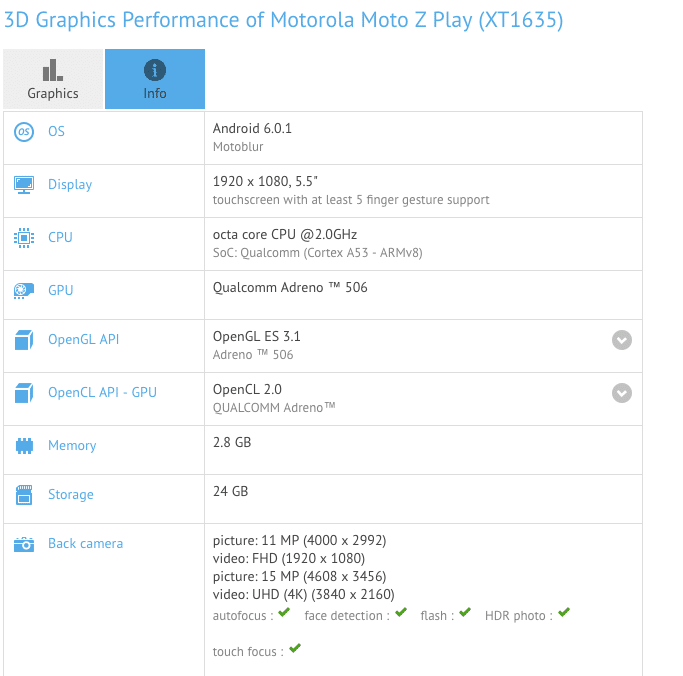 As far as other major smartphone specifications of the phone are concerned, the phone is all set to come with 16 megapixels rear shooter with 4K video recording capabilities. On the front, there will be a 5 megapixels snapper for clicking great selfies. The phone will surely have atleast 3500 mah Battery under the hood. Previous leaks suggested an inclusion of a 3500 mAh battery. Fingerprint scanner will be placed at the chin of the device just like the previously launched phones. The phone will have a glass back instead of the full metal unibody design seen in Moto Z and Z Force. The price and availability date of the phone will be disclosed at the launch event only. In India, the phone will be placed around INR 30000 and will be up for sale at the end of October or mid-November.