Xiaomiâ€™s latest tablet, Mi Pad 3 has gone official earlier this month. Now, Xiaomi Mi Pad 3 has been spotted on GFXBench. The GFXBench listing reveals 8-inch display (actually, it is a 7.9-inch device) backed by a Mediatek MT8176. GFXBench has shown wrong No of cores for the same chipset. Mediatek MT8176 is a Hexa core processor, but the benchmark listing showed it as a Deca Core processor. Rest of the specs shown are correct. The Mi Pad 3 runs on Android 7.0 Nougat. 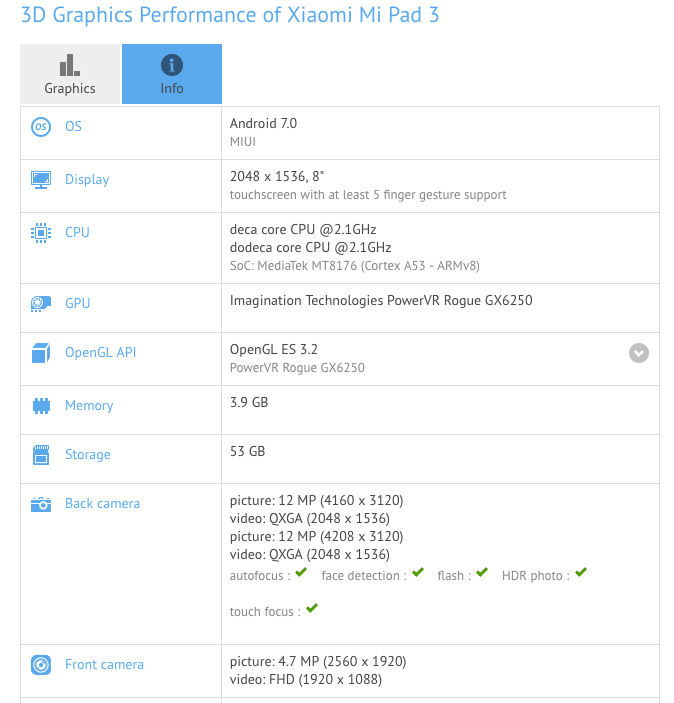 RAM is 4GB, while the internal storage space is 64GB. There is no external storage support. Camera-wise, the listing revealed two 12-MP cameras at the rear. In real, the Xiaomi Mi Pad 3 has a 13-megapixel rear facing camera. On the front, there is a 5-megapixel front snapper. The tablet packs a 6600 mAh battery with fast charging feature.

Availability of the tablet is unknown. Launch of the same in India is not announced yet. The tablet was listed on the Chinese site for RMB 1499 (Rs 14090 approx).